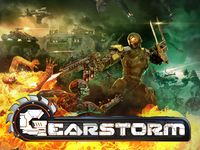 GearStorm is an upcoming game currently in development by Iron City Games.

GEARSTORM is a militarized science fiction sandbox in which players cooperate and compete to colonize and fortify their positions on a hostile alien planet. GearStorm takes place on an huge, open, procedural, and entirely destructible world. Here players can advance and customize their technology to improve their chances against each other and the Phage – a deadly nano-virus that is decimating human population.

In the year, 2185, the human race is in its final death throes. Earth itself is a desolate waste, ravaged by decades of war. War, more malignant, more savage than any conceived of before. War fueled by diverging ideologies, waning resources, and drastic technology advances of the 21st century. For years, humanity bathed itself in blood, fire and death.The final death knell came in the form of the Phage. A virulent genetically-engineered biological weapon that weaponized the infected into rageful bio-mechanical horrors that spread the plague and death. The unstoppable Phage spread like wildfire through man and beast alike. With no way to undo what was done, the remnants of humankind retreated into bunkers, or walled cities, and fortresses. But even these, one by one fell to the Phage.

With Earth all but lost, a glimmer of hope was discovered. Automated Kepler systems that had been in operation for nearly a century discovered an extremely unlikely, human habitable extraterrestrial world. These probes reported amazing findings dozens of light-years away on a planet dubbed as Apollyon. Apollyon was a small earth-like planet with isolated continents in a large ocean. These islands showed signs of ecosystems, flora and fauna.

The mad rush to escape this hellish Earth, lead to tragic mishap and loss. Previous attempts to send manned generation ships to Apollyon failed either due to infighting or mechanical failure. In a final act of desperation, small, unmanned probes, fitted with advanced bio-printers were launched to seed Apollyon to save the species. These probes were encoded with the DNA and mental recordings of the finest of our remnants and cast off towards the planet.

You are one of these ghosts, a fabricant sent to an alien world to renew humanity. You carry the hopes and legacy of us all. Remember us.