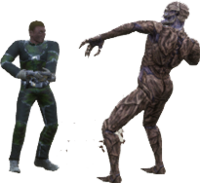 Zombies are one of the key features in GearStorm. The game features a full zombie apocalypse.

The Phage is a virulent genetically-engineered biological weapon that weaponized the infected into rageful bio-mechanical horrors that spread the plague and death. Released on Earth, the unstoppable Phage spread like wildfire through man and beast alike. With no way to undo what was done, the remnants of humankind retreated into bunkers, or walled cities, and fortresses.   But even these, one by one fell to the Phage.